The Wood Frog is a medium-sized frog that measures about 1-2¾ inches long. It is brown with dorsolateral ridges (folds of skin in either side of its back) and a black mask behind its eyes. Also look for the black “backpack straps” on the front of each shoulder.  Like the Spring Peeper, its colors vary with temperature and gender; female Wood Frogs are often larger and redder.  Young Wood Frogs are often mistaken for Spring Peepers.  Be sure to check for the dorsolateral ridges and backpack straps.

Wood Frogs are one of the first frogs to call in the spring. Their singing peaks around the middle of April.

Egg masses are softball-sized with 700 or more eggs. Females often lay eggs in the same area of a pool as other females and large mats of egg masses can be found.

This species is very sensitive to fish and other aquatic predators and is usually associated with vernal pools, but its duck-like quack can also be heard from the margins of semi-permanent pools or other small bodies of water.

Wood Frogs are very common in Vermont and have been found in almost every town. It has a state natural heritage rank of S5 (common). Please report sightings of this species in Vermont if you have not reported them within the last five years from a given location. Any natural history observations (feeding, migrations, road crossing areas, early or late season appearance, abnormalities, etc.) are appreciated. Photographs are always helpful, particularly if your report is the first report of this species from a town. 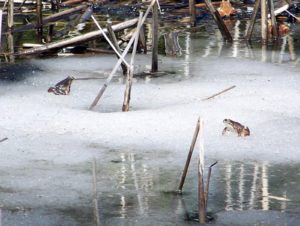 All the Vermont species listed in the Rana genus were reclassified into the Lithobates genus in 2007. Rana sylvatica became Lithobates sylvaticus.